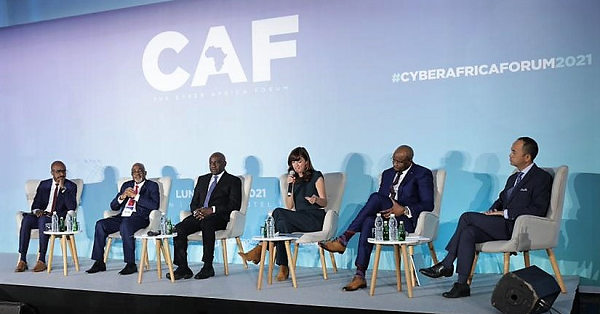 Discussants at the Cyber Africa Forum

The first edition of the Cyber Africa Forum, organised by cybersecurity expert, Franck Klé, in partnership with the International Cybersecurity Forum and the ECOWAS Commission was held on Monday, June 7, in Abidjan, Côte d’Ivoire.

At the event, the President of the Commission, Jean Claude Kassi Brou was bestowed with the Léon Konan Koffi Prize of Honour, named after the Ivoirian Stateman, former Minister of the Interior from 1981 to 1990, and Minister of Defence from 1990 to 1995.

The Cyber Africa Forum is aimed at making cyber security a priority in Africa, and ensure progress is made in enterprises regulation and strategy.

Discussions were held highlighting the major trends, practices and commitments in cybersecurity on the continent: digital transformation of the economies against cyber threat, national and regional statements on cybersecurity strategies, as well as the emergence of mechanisms for prevention and protection which becomes more and more innovating.

Under the sponsorship of Roger Adom, Côte d’Ivoire’s Minsiter of Digital Economy and Innovation, the Forum was attended by several personalities, namely Saïd Oumar Koulibaly, Minister of Post, Telecommunications and Digital Economy of the Republic of Guinea, Dr Zouli Bonkoungou, Commissioner for Telecommunications and Information Technology and a number of stakeholders in communication and cybersecurity from the African and international private sector.

Declaring the Cyber Africa Forum open, Côte d’Ivoire’s Minister of Digital Economy and Innovation emphasised the priority his country gives to cybersecurity by establishing an adequate legislative framework to ensure a secured growth of economic ecosystems.

“A law on the protection of personal data was passed in 2013, as well as another on digital transactions, while the African School of Technology has, since 2007, trained 170 Engineers. It in this regard that the Ivoirian authorities, which I represent, have naturally supported the organisation of this Cyber Africa Forum. An important event, which promotes the indispensable identification and understanding of economic risks of cybersecurity,” Minister Roger Adom added.

Speaking on behalf of Dr Jean Claude Kassi Brou, Commissioner Dr Zouli Bonkoungou in charge of Information Technology and Telecommunication corroborated in his opening speech that: to fight against these threats in another dimension, intra-African cooperation is expedient. That is why ECOWAS has set up a cybersecurity agenda which reflects the importance of these challenges for member countries of the Community. This initiative will promote digital transformation security on the continent, and assist ECOWAS Member States in making their cyber space secure.”

He also recalled that the ECOWAS Cybersecurity Agenda is aimed at increasing cyber resilience in the region, assisting Member States to strengthen their cybersecurity capacity, protecting their cyberspace and major information infrastructure, boosting confidence and security in the use of ICT and effectively fighting against cyber crime.

The Cyber Africa Forum also featured the award of distinction of the Léon Konan Koffi Prize of Honour on Dr Jean Claude Kassi Brou, President of the ECOWAS Commission.

The Prize is named after the Ivoirian Stateman, erstwhile Minister of the Interior from 1981 to 1990 and Minister of Defence from 1990 to 1995. The prize was received on behalf of the ECOWAS Commission’s President by Commissioner Zouli Bponkoungou, .

Apart from the Commissioner for Telecommunication and Information Technology, the ECOWAS Commission delegation to this conference comprised Dr Kouamé Raphael Koffi, Acting Director of Digital Economy and Post and Mme Sandra Oulate, Director of Communication.