When England lifted the ICC World Cup 2019 after a most thrilling final against New Zealand, the cup finally came home to the cradle of cricket forty-four years after its inception. It was a dramatic turnaround from the 2015 edition, when they had crashed out at group stage after losing to Bangladesh. At the time, they were said to be an old-fashioned team that hadn’t adopted new cricketing tactics that had come in the wake of the T20 revolution. England introspected and realized that their way of playing one-day cricket was extinct, while the rest of the cricketing world had moved ahead. They now approached their game with fearlessness, and the result was the 2019 victory.

Former England captain Nasser Hussain believes that playing in the IPL helped English cricketers learn how to play under pressure. There was no better example than Ben Stokes, the man of the match in the 2019 finals. Cricket commentator and journalist Harsha Bhogle described the IPL as the ‘Davos or Woodstock of cricket’ where the opportunity to learn through osmosis is huge. There are life lessons galore in the IPL. Australian batsman David Warner credits his rise as a destructive test cricket player to the tips he received from Indian batsman Virender Sehwag when the two played for the Delhi Daredevils team.

Similarly, Bollywood director Imtiaz Ali told us about the film industry, where people come together for periods lasting six months to two years to make a movie. Assistant directors, cinematographers, production designers, editors and many other film professionals bring together their vast and diverse experiences to contribute ideas that lead to a collective thrill, a better film and all-round learning.

Osmosis is to gradually or unconsciously assimilate ideas and knowledge from each other. At the task force, however, this process happened much faster—not gradually or slowly—because of the pressures we worked under, but osmosis could be seen at work all around us. If we were to surmise what every member learnt over the ninety days of the task force, they would be:

2) The art of strategic influencing

3) The power of implicit trust

Widely available technology—Zoom, WhatsApp, phones and email—were all that we required to keep the moving parts of the task force together. Using these technologies and applications, we moved from the concept to the finished product without using an enterprise resource planning (ERP) system or sophisticated project management tools. Except for the founders flying in twice from Pune to Delhi to show a demo to the government’s approval committee, members took no other flights and left barely any carbon footprint. 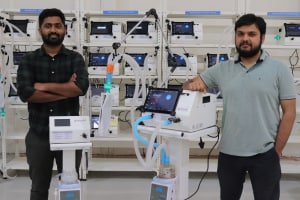 We also needed to learn the art of strategic influencing, that is, to be able to persuade the government-appointed DGHS (Directorate General of Health Services) committee that we had a good product; to get influential doctors excited about our indigenous ventilator; to get several small and big manufacturing partners to want to work with us; to have component suppliers ready to supply to us even when availability was scarce; to have senior bureaucrats willing to help us cut through logistics bottlenecks; and for influential print, television and online media to cover our progress. Strategic engagement with such a diverse and disparate set of stakeholders was an art many task force members had to learn for the first time.

For Srikant, it was eye-opening to see how Rakesh (Bhargava) reached out to the best ICU heads across the country to get their endorsement for the product. Or to see how Ajai (Chowdhry), Saurabh (Srivastava) and Pavan (Choudary) identified the key members of the government appointed DGHS committee so as to try and make a strong case for our ventilator. For all his years of business experience, Srikant has never engaged deeply with the government, so he walked away thrilled with these new insights.

The task force also needed to learn the power of implicit trust and believe that others would deliver what they needed to. There was no time to second-guess expertise or intent; rather, it was assumed by all members that things would get done. If help was required, it was sought, and others would readily step in. Trust was important here, especially as we were also making friends within the task force without ever meeting each other physically. But by the time the task force was disbanded on 1 July, it felt like we were a fellowship that had come together on a quest. On this journey, older members learnt from the younger ones about the power of animated GIFs to lighten the mood every time a crisis was overcome, or a milestone crossed. For the founders and younger task force, the ninety days felt like an accelerated three-month MBA with five courses:

1) Attitude 101: abolishing the word ‘No’ from their vocabularies; learning from setbacks and moving ahead calmly; and living with ambiguity

2) Problem Solving 101: going beyond the obvious

3) Behavioural Science 101: how to be a great listener; how to delegate with confidence; how to collaborate and ask for help

4) Marketing 101: the art and science of engaging customers and media; demand generation; building an aggressive sales pipeline; and basics of pricing

Excerpted with permission of Pan Macmillan India from The Ventilator Project: How the IIT Kanpur Consortium Built a World-class Product during India’s Covid-19 Lockdown by Srikant Sastri and Amitabha Bandyopadhyay; Hardback Rs. 599